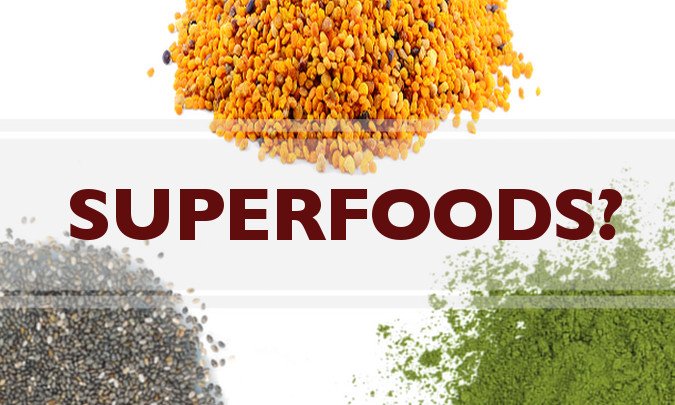 Over the last few years the term “Superfood” has become a buzz word and has been used more and more, every month there is a new Superfoods cookbook available to buy in the shops or a TV programme to watch on another channel. So why have we never jumped on the band wagon and marketed our products as “Superfoods” at the RealFoodSource? Here’s our reasons why.

There is actually no widely accepted definition of what a ‘superfood’ is. The Oxford Dictionary defines a superfood as being ‘a nutrient-rich food considered to be especially beneficial for health and well-being’.  The EU state that products labelled as ‘superfoods’ have to have an authorised health claim to back this up, in the form of research and evidence.  Other than that there is no agreed definition.

2. So Many Foods could be Classified as Superfoods including the Humble Egg

Here at RealFoodSource we believe that there are a host of everyday foods you could classify as ‘super’.
Take for example, the humble egg.  It contains all 9 essential amino acids as well as being rich in iron, selenium and various vitamins. It is claimed we could technically live off just eating eggs as they are nutritionally complete, but that may not be much fun, even if you love eggs!   So surely an egg, preferably free range or organic, is one the best superfoods, in fact perhaps even an ultrafood? Yes, we have just made that term up! However you don’t walk past the packs of eggs in a supermarket and see the word ‘superfood’ splashed on the packaging, do you? There are likely many reasons for this such as negative perceptions on fat and cholesterol, though these perceptions have been seriously challenged over recent years. No doubt the egg will be elevated to superfood status in the near future!

3. A Super Food is Not Super for Everyone

Everyone is different and a food that may be ‘super’ in one person’s diet may not be super for another persons. For example, some people consider walnuts to be a superfood and although walnuts have an excellent nutritional profile if you were a person who suffered from a nut allergy you wouldn’t think they were  ‘super’ and wouldn’t eat them because you were told they had miraculous benefits. Therefore we don’t think it’s appropriate to label it a superfood, it isn’t a case of one size fits all.

For a food company to legally market a product as a ‘superfood’ there must be research to support the health claim made. The case with many ‘superfoods’ is that the company marketing the product will be funding the research to prove the health claim. They will approach researchers, for example a university and say ‘we want to prove that our product can reduce the risk of this disease.’ In most cases it can be proved by taking a pure form of the nutrient present in the food and testing it in a lab setting at a much higher dose than we consume in our food. Therefore, even though the health claim may have been proven in a lab setting, eating a large amount of a ‘superfood’ may not actually provide enough of the specific ingredient to have the beneficial effect on our health that is stated by the health claims. In addition, many of the other compounds that may be less beneficial or even considered harmful will be ignored with only the claim being stated and marketed.  In our mind, that’s not the right thing to do.

We’re also seeing trends that come and go like fashion for food which we don’t buy into. Nearly every day of the week a news story or article is published stating that a certain food is the new up and coming ‘superfood’ that we should all be eating and that it can prevent us from getting cancer or a disease such as Alzheimer’s. Then a few months later a new article comes out stating that the ‘superfood’ might not actually be any more nutritious than a similar everyday, conventional product.  At the RealFoodSource we don’t just jump on a trend as we believe food is a staple not a fashion trend!

Furthermore, with all this conflicting information it is bound to confuse even the most clued up consumer. Take for example, the Strawberry v Goji Berry argument that was discussed on the BBC programme “The Truth about Healthy Eating” . Goji berries were hailed as being one of the highest sources of Vitamin C but research had shown that there was no significant difference in vitamin C levels throughout the day after consuming a portion of goji berries versus a portion of strawberries. This may well be the case but studies like these only look at it from the one point of view. It doesn’t take into account the weight consumed considering the majority of a strawberry is made up of water as well as the cost and the whole nutritional make-up, not just vitamin C. It also ignores the convenience of carrying a pack of goji, over a punnet of strawberries or one with a much longer shelf life over one that is a perishable food. Similarly it was suggested in the same programme that Rapeseed oil is comparable to Coconut oil in health benefits but at a fraction of the price. This may be the case for certain nutrients however they completely ignored important things such as the high lauric acid content in coconut oil which is not present at all in rapeseed oil.  When a TV programme is only pointing to specific facts and ignoring the others it makes it hard for the average consumer to have a complete view of a food to chose whether to eat it or not and labelling something a “super” only adds to that confusion.

With all the conflicting information, lack of definition and trend we think the term “Superfood” is really just a way to label certain foods to inflate prices and increase sales.  We think it’s similar to labelling foods “raw” that couldn’t possibly be raw (if you are interested see our blog on Can Cocoa Ever Be Truly Raw? here). Customers are often being misled into buying products labelled as raw ‘cacao’ that are not even close to being the raw superfood that cacao is claimed to be.   In a similar way no doubt once the majority of foods have achieved superfood status we will end up with mega foods, hyper foods, ultra foods, or some other term to inflate prices or increase sales!  It’s just not what the RealFoodSource is all about.

We pride ourselves on being honest and upfront and we encourage customers to do their own research so that they can make conscious decisions on the food products they buy.

We believe that all the foods we sell are super or we simply wouldn’t sell them, that includes all the foods in our range others sell as “superfoods”!  However, we will always offer great food products at low prices, and leave the superfood hype and inflated prices to others.

We are also agnostic to particular diets but believe everyone should find the best foods that work individually for them and we definitely think the best kind of diet is one that includes lots of fresh, preferably locally grown, preferably organic produce where possible. With that in mind we have begun introducing locally grown products such as our Scottish oats and we hope to build on this in the future. We also understand we live in the modern world and convenience is important so we offer the foods in our range that have ’super’ nutritional benefits similar to fresh produce with added convenience. We also offer great super convenience products such as our Chia Berry Coconut Porridges to start your day and our Green and Energy blends you can simply add to your smoothies or bakings.  We also adhere to the 80/20 rule of eating, eating healthy 80% of the time and allowing time to indulge in treats 20% of the time.  We believe by offering the most “super” healthy treats such as the best chocolate drops, bars, infused berries and chocolate covered nuts the 20% can actually be quite super too!