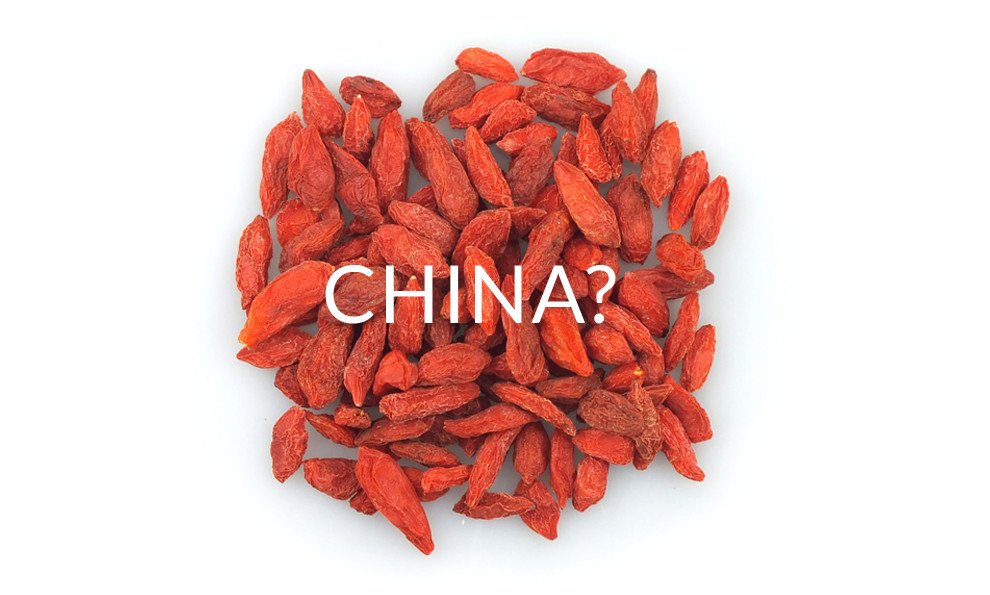 The majority of our products are not from China but we do stock a few key items that do originate from China such as our excellent Organic Goji Berries.  We often get asked are these products safe and when organic are they truly organic?  We discuss at length in our blog post here.

Is Food from China Safe?

Here is the UK we adhere to strict EU food safety rules.  The European Commission sets out rules for all EU countries to follow when it comes to food safety. Countries then decide the organisations that should have control over this. These organisations are then monitored to ensure that they are following the legislation laid out by European Commission. For instance, in the UK the food safety testing on imports from China is done by government approved laboratories.

Regarding safety, all food that is imported into the EU is tested against EU standards established to address a plethora of potentially dangerous crop residues. This testing is incredibly comprehensive, covering not just modern synthetic pesticides and fertilisers such as Glyphosate, but also those used by many organic growers such as sunflower oil. This testing is done against a set of Maximum Residue Levels set by the EU, which are based on peer reviewed scientific papers that investigated the effects of different doses of the active ingredient.

As with all things there are limitations to this testing. For instance, the sampling is often done from just one bag or container. This means that if there is a large import, only a very small quantity of it will actually be tested, with the remainder being assumed to be the same as the sample. Another clear limitation is that while the EU may have a extensive list of Maximum Residue Levels, they do not test all crops for all residues. To save time and money, they simply test each crop for its most probable residues depending on the situation. As an example, there is no real need to check for a broadleaf herbicide on importations of a broadleaved plant, seeing as it would never have grown had such a herbicide been present. This approach is lacking in the fact that it does not rule out contamination from another source, or post-harvest, such as the use of a herbicide on an adjacent field or chemical contamination during storage and transport.

In the main though this testing is very thorough and protects the consumer within the EU to ensure foods imported from outside the EU are safe.

Outside of the EU this is different and indeed many of the articles regarding food from China are written from a USA standpoint. This is highly significant, seeing as there are many differences between the two economic and legislative zones.

Countries outside of the EU also have certification bodies and legislation governing food safety and organic status. Quite often these have lower or different standards as compared to the EU. Furthermore, quite often they have poor monitoring and control over food exports by their certification and testing bodies.

As with food safety the European Commission sets out rules for all EU countries to follow when it comes to organic status. Countries then decide the organisations that should have control over this, here in the UK this is done by ten certification bodies of which our certifier the Organic Food Federation is one.  These organisations are then monitored to ensure that they are following the legislation laid out by European Commission for testing organic imports.

When it comes to organic food from China or indeed any food from outside the EU, the food will be tested against the organic standards of their own country but then, very importantly, once exported into the EU the import will also come under the scrutiny of a EU certification body to ensure the food adheres to strict EU organic standards. Here’s more details.

In the first instance, non-EU crops are tested against the organic standards of their own country of origins, government or private certification bodies. This testing often involves a comprehensive investigation into the entire supply chain until point of export, starting with the farmers of both the main and seed crop, to ensure that they are in compliance with the standards that the organisation has for organic food. The certification body will also ensure that no chemicals are in contact with the food for the remainder of the supply chain, such as in storage or during transport.

This system is not without its flaws and there are people that look to take advantage of these. Organic fraud has existed for many years and still continues to happen both on large and small scales.  In our view although China has been given a bad rap some of the largest organic frauds have actually taken place outside China. The fact is, there are so many people and so much money involved in the growth and sale of organics that there will always be someone looking to take advantage. However, the development of governing bodies has helped the problem. Where once a farmer could lie about growing his crop organically, he now faces the rules set by both his own country and the EU, making it much less likely that he could commit fraud without being caught by a more ethically-minded organisation. One example of fraud that has that has yet to be fully brought under control is that of fraud within certification bodies. A large-scale recent example of this took place in 2016, when Italian investigators found organic grain being imported into Malta to be fraudulent. Over a six-year period they are thought to have imported a total of 350,000 tons of fake organic food, potentially equating to €126 million.

Ultimately, it is up to personal preference, whether you choose to trust the European Commission and accompanying certification bodies when it comes to the organic status of your food.  However, once again it’s important to note that the standards in the EU are very rigorous for imported food and could be different in other countries where the organic standards and implementation of the standards may not be done to the same high level as what is adhered to here in the UK.

As a company we only purchase from trusted suppliers doing all the due diligence we can to ensure our foods are the highest quality and to protect ourselves from organics fraud.

With products from China we only buy from suppliers in the EU who retest food to strict EU rules. However, it must be understood that we are not large enough as a company to carry out in-house testing for either residues or undertake a comprehensive investigation into each one of the producers and corresponding supply chains. So we, much like the consumer, are at the mercy of the EU and the certification bodies to make the best decision they can on the organic status of food imports.

We also understand that for some consumers they simply don’t want to eat produce from China.  So where possible, we additionally offer alternatives to Chinese grown products for people who desire them, such as the pumpkin seeds currently offered on our website where we have the premium AAA Austrian version and the cheaper AA Chinese version. We also clearly advertise when a product is always sourced from a particular region eg. EU for our hemp seeds or Spain for our Organic Almonds.  We show “xxx” on our product pack images on our sales channels because for most products we are sourcing from around the world from the latest harvests to ensure we keep the freshest stock and would constantly be updating imagery that would add to cost – for example with chia we get deliveries every couple of weeks from different countries.  However, we are always happy to confirm the country of origin of any of our products, simply drop us a note to our contact us here with the products you are interested in and our team will respond very quickly.