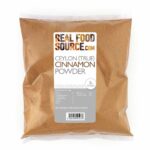 Our highest quality Ceylon cinnamon also known as true cinnamon. Unlike cassia which is the common cinnamon you will find in supermarkets, true cinnamon is a milder, reddish brown cinnamon with a delightful aroma.

Ceylon cinnamon has as sweeter taste and contains less coumarin than cassia.

The cinnamon is taken from the inner bark of the true cinnamon tree (Cinnamomum zeylanicum). Although the tree is native to Sri Lanka, this tree is also cultivated in Madagascar.

Cinnamon is an excellent alternative sweetener and is great for use in baking and adding to desserts such as cookies and brownies or for simply adding some flavour to porridge or smoothies.