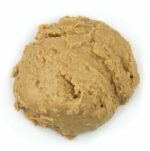 Toasted Cashew Butter is produced by grinding roasted cashews until a rich, butter-like consistency is formed. Cashews are not actually nuts but the seeds of the cashew tree, known scientifically as Anacardium occidentale. These seeds, encased in shells that are removed before processing, adhere to the base of the cashew apple, which is the tree’s fruit. Cashew Butter is a good source of protein as well as being rich in healthy monounsaturated fats and essential minerals. Fantastic for thickening sauces, smoothies and curries (especially Indian and Thai).

Cashew butter is low in carbs and is suitable for many types of gluten/grain free diets.  We also have Organic Cashew Paste in our range for gluten free and cashew recipes as well as other nut butters such as almond, hazelnut and peanut.

As well as being low in carbs our toasted cashew butter has no added sugar, salt, preservatives or emulsifiers so is an ideal substitute for spreads and butters that may be loaded with sugar and salt.

This product is supplied in 1kg tubs.